The day started with a prayer and the National Anthem of the Philippines. Next is the welcome from the representative from AIE College of Gapan and from +Amit of Google. This was followed by the inspiring sharing of +Reymart Canuel (+GDG Baguio Community Manager) about the Innovations at Google. The next topic is Google Apps for Education and how students and teachers could maximize such technologies. Afterwards, +Jomar Tigcal shared about the basics of Android development followed by +Anne Michelle Santos who shared about the initiatives of +Globe Labs.

During the afternoon, +Alvin Edwald Chan explained to the students the dynamics and basics of game development. After which, +Wilson Censon briefly explained to the students HTML5. This was followed by +Wayne Manuel's Google MapMaker and Google Maps API session. To end the long fun day, +Chelle Gray shared about the different initiatives of Google and Google Developers Group to the community. 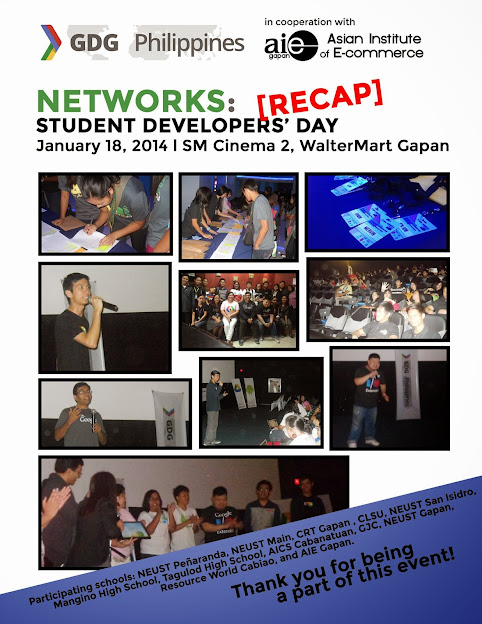 Thank you so much AIE College of Gapan for organizing an event for the students and teachers in the province of Nueva Ecija. Thank you +Globe Labs and +Google Developers for the support to the local developer community.

Follow +GDG Philippines in Google+ to get updated with our latest events!
Posted by Celine Barrozo at 1:23 AM No comments:

After the successful GDG DevFest Women Philippines 2013, GDG Philippines is organizing another DevFestW this year. To help us plan the event, please fill up (and share) the form at https://docs.google.com/forms/d/1CN5HEErdYhB_SWbQTvl90FPbF3fjCxJEXURc5SvxxHI/viewform.

Posted by Jomar Tigcal at 11:06 AM No comments:

2013 has been another busy year for us here in GDG Philippines. Last year, we've had:

And, as early as November and December, we already have planned some events for the first quarter of 2014. If you're a student and you're interested in a Student Developers Day, fill up and share form at http://studentdevday.gdgph.org/. We're also planning to have GDG DevFest, GDG DevFestW, more Code Labs and workshops and more meetups.

For updates on our next events, add GDG Philippines Google+ Page in your Google+ circles.

Posted by Jomar Tigcal at 3:33 PM No comments: